“Soldiers would have rifle magazines – I had coloured pens and brushes” 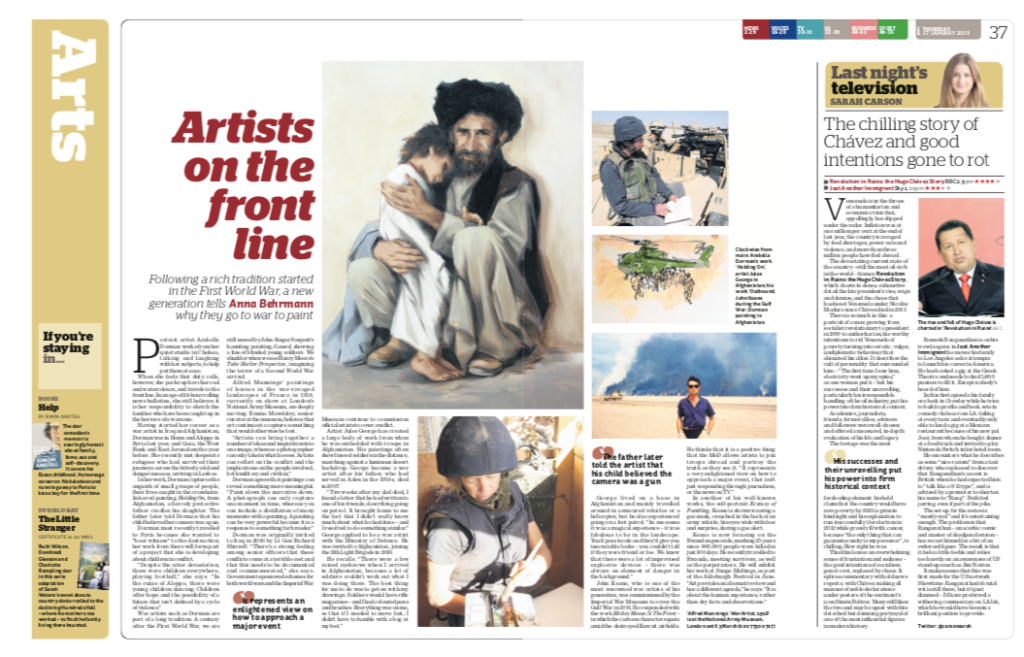 Portrait artist Arabella Dorman works from her quiet studio in Chelsea, talking and laughing with her subjects, to help put them at ease.

When she feels that duty calls, however, she packs up her charcoal and watercolours, and travels to the frontline.

In an age of 24-hour rolling news bulletins, she still believes it is her responsibility to sketch the families who have been caught up in the horrors of a warzone.

Having started her career as a war artist in Iraq and Afghanistan, Dorman was in Homs and Aleppo in Syria last year, and Gaza, the West Bank and East Jerusalem the year before. She recently met desperate refugees who had survived their journeys across the bitterly cold and dangerous seas, arriving in Lesbos.

In her work, Dorman captures the anguish of small groups of people, their lives caught in the crosshairs. In her oil painting, Holding On, from Afghanistan, a fiercely protective father cradles his daughter. The father later told Dorman that his child believed her camera was a gun.

Dorman most recently travelled to Syria because she wanted to “bear witness” to the destruction; her work from there will form part of a project that she is developing about children in conflict. “Despite the utter devastation, there were children everywhere, playing football,” she says. “In the ruins of Aleppo, there were young children dancing. Children offer hope and the possibility of a future that isn’t defined by a cycle of violence.”

War artists such as Dorman are part of a long tradition. A century after the First World War, we are still moved by John Singer Sargent’s haunting painting, Gassed, showing a line of blinded young soldiers. We shudder when we see Henry Moore’s Tube Shelter Perspective, imagining the terror of a Second World War air raid.

Alfred Munnings’ paintings of horses in the war-ravaged landscapes of France in 1918, currently on show at London’s National Army Museum, are deeply moving. Emma Mawdsley, senior curator at the Museum, believes that art continues to capture something that would otherwise be lost.  “Artists can bring together a number of ideas and inspiration into one image, whereas a photographer can only take in what he sees. Artists can reflect on the conflict and the implications on the people involved, both military and civilian.” Dorman agrees that paintings can reveal something more meaningful.

“Paint slows the narrative down. A photograph can only capture one moment in time, whereas you can include a distillation of many moments with a painting. A painting can be very powerful because it is a response to something far broader.”

Arabella Dorman at work on the frontline in Afghanistan Dorman was originally invited to Iraq in 2006 by Lt Gen Richard Shirreff. “There’s a strong feeling among senior officers that these conflicts come at a terrible cost and that this needs to be documented and commemorated,” she says.

The government-sponsored schemes for both world wars and the Imperial War Museum continue to commission official artists to cover conflict.

Artist Jules George has created a large body of work from when he was embedded with troops in Afghanistan. His paintings often show lines of soldiers in the distance, marching against a luminous desert backdrop. George became a war artist after his father, who had served in Aden in the 1950s, died in 2007.

‘Everything was on me, so that if I needed to move fast, I didn’t have to fumble with a bag at my feet’ Jules George, war artist “Two weeks after my dad died, I found a letter that he had written to one of his friends, describing going on patrol. It brought home to me the fact that I didn’t really know much about what he had done – and I resolved to do something similar.”

George applied to be a war artist with the Ministry of Defence. He was invited to Afghanistan, joining the 11th Light Brigade in 2010. He recalls: “There were a few raised eyebrows when I arrived in Afghanistan, because a lot of soldiers couldn’t work out what I was doing there. The best thing for me to do was to get on with my drawings. Soldiers would have rifle magazines – and I had coloured pens and brushes. Everything was on me, so that if I needed to move fast, I didn’t have to fumble with a bag at my feet.”

George lived on a base in Afghanistan and mainly travelled around in armoured vehicles or a helicopter, but he also experienced going on a foot patrol. “In one sense it was a magical experience – it was fabulous to be in the landscape. You’d pass locals and they’d give you inscrutable looks – you couldn’t tell if they were friend or foe. We knew that there were a lot of improvised explosive devices – there was always an element of danger in the background.”

John Keane, who is one of the most renowned war artists of his generation, was commissioned by the Imperial War Museum to cover the Gulf War in 1991. He responded with the work Mickey Mouse At The Front – in which the cartoon character squats amid the destroyed Kuwait airfields. He thinks that it is a positive thing that the MoD allows artists to join troops abroad and portray the truth as they see it.

“It represents a very enlightened view on how to approach a major event, that isn’t just responding through journalism, or the news on TV.” In another of his well-known works, the self-portrait, Ecstasy of Fumbling, Keane is shown wearing a gas mask, crouched in the back of an army vehicle; his eyes wide with fear and surprise, during a gas alert. Keane is now focusing on the Rwandan genocide, marking 25 years since 800,000 people were killed in just 100 days.

He recently travelled to Rwanda, meeting survivors, as well as the perpetrators. He will exhibit his work at Snape Maltings, as part of the Aldeburgh Festival in June. “Art provides an alternative view and has a different agenda,” he says. “It is about the human experience, rather than dry facts and observations.” ‘Alfred Munnings: War Artist, 1918’ is at the National Army Museum, London until 3 March.

View all posts by Anna

This site uses Akismet to reduce spam. Learn how your comment data is processed.